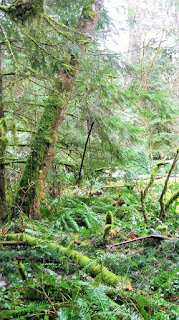 NOTES
Tao Te Ching 28
'When considering any thing, do not lose its opposite. When thinking of the finite, do not forget infinity ...' D Lau

The Tao Te Ching has seen over 250 translations. The above link takes the reader to one of the most highly regarded versions. Included is a fairly comprehensive explanatory introduction.

hidden beneath the leaves

a six mat room off the lecture hall, veranda sliders opened to slick black rock round with age and gravel awash in white snow, ink mixed, the abbot's scroll complete, brushes clean, master ko considering the small tiger sawn oblong of ancient oak, its patina gently scraped, him crosslegged, considering, but some hesitation stalls emptiness, clarity: beneath the stout little cup of mashiko clay on his pine shelf is the crumpled letter from oregon, much traveled that, his book of poems published, would he come? feeling indifference or? and what might he reply? ... while a thief in the night has stolen two bags of rice and one of radishes, the abbot's harsh words, the gardener's curse, the professor saying, so, who dares befriend this degenerate reprobate?

NOTES
The kanji for friend is often thought of as two hands, right and left, reaching out to each other. However, the old kanji for two right hands clasped is considered the origin of this character. The notion expressed is one of mutual support.

Tao Te Ching 27 (Feng and English):
If the teacher is not respected,
And the student not cared for,
Confusion will arise, however clever one is.
This is the crux of mystery 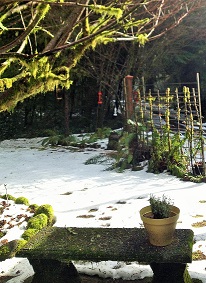 NOTES
Tao Te Ching 26:
The sage travels days on end and never loses the way
always full, emptiness is his path
through noisy byways, silence is his shelter

dawg kneedeep in slow eddy of graygreen water, creek softly over shallow ledge, through snow covered banks, rimed gravel, riffling white over rock on its way to the sea, down and down ineluctably, seams unseen, paths unknown, flowing, beguiling to human kind, beyond our ken, though how different are we from this watercourse way

NOTES
ineluctably: unable to be resisted or avoided; inescapable.

Tao Te Ching, Feng and English - 25 '... something mysteriously formed ...'
man should follow the earth,
for earth follows the heavens
and the heavens follow the Tao.
The Tao ... just and only natural