This is the 13th (of 81) installment of the prosepoem hidden behind the leaves. The first poem was published August 16, 2020. The four part narrative tells the story of Master Ko. 'Autumn' is the first part, and the seasons will provide a background theme for each subsequent installment.

saffron, says mia, a shade, tints of yellow, of orange, from the crocus ... and my tattered robe, says master ko, holding out his arms, bobbing his head, turning, gift from friend, he adds, a frown wrinkling his brow, no longer with us he is, considering the leaves of autumn, but with us still, nodding, he is ... and the wrong color for you, says mia, buddhists here usually wrap themselves in black or grey, turning her head to question as the little man chuckles, and their busy minds hobbling from this to that, stumbling through their days, multi-tasking, says she, ritual rites and wongs, ha, says he, hairsplitting, quibbling and callousness, quietly now stepping along the needles and bits of stone embraced by the sweep of conifer limbs 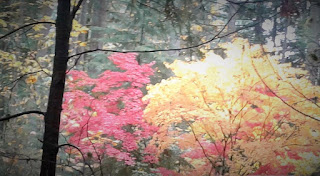