Mia sat at the small round table that was curiously scarred with cigarette burns. He was somewhere. Unlike him, she thought. She waited, shook her head at the lumpy straw mats in the corner, considered the staff leaning against the window casing, the cup on the shelf. Wind rustled the limbs of trees. Rain threatened. Tomorrow she would leave. It was no distance at all from here to there.

She turned to her notebook and took up the pencil. Tapping the pencil point absently on the table, she at last decided and wrote:

Between Pacific City on the Oregon coast and the Cape Meares lighthouse to the north is a narrow two lane blacktop road that serves both the locals and the tourists---the dairymen and the fishermen, the hiker and the bicyclist---by providing access to land and sea. At the same time, the road serves by giving definition to the land, a physical definition through its function as a line that takes the measure of the terrain as the lines on a contour map do, now rising, now falling, here looping, there straightening; and a transcendental definition through its function as a poetical metaphor that takes the measure of this geography as a poem takes the measure of an idea or theme.

The poem uses the collision of words, the separation of phrases, to express itself. The road finds its expression in the brown cows ruminating cud, in the rusted jetsam that once was truck, in the solitary chimney standing sentinel over the blackened rubble that once was house, in the red barn, the sand dunes and mats of salal, the towns of ramshackle and renovated that punctuate the road, in the estates of chime and glass, cottages with frayed lace curtains and unkempt lawns, the bright green rectangle of new laid turf, the stumps and deadfall littering clear-cut hillsides, the mongrel yapping at the end of its chain, a rock slide, a bent and twisted guardrail, the missing sign, the rock and sand, and, finally, in the lighthouse, barely visible through the evergreens, a revolving blip of light out on some final point of land that measures the waves steady thump and rumble.

The pencil lifted from the page. She peered through the open door of the hut. Sighed. Rustle of leaves. He was somewhere. Odd. She waited.

emptiness is your seat, stillness is your shelter, says master hongzhi, china man, that one; i am the boy that so enjoys invisibility, says me 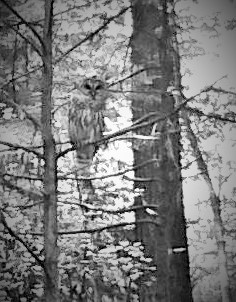 walking in tsuruoka, sea air, but where I come from many places, mongrel dog, mother chinese, father japanese white boy, born on oahu make me sandwich islander, bit of baloney, onion, slice of bitter pickle, hold the mayo, all same as mahatma ghandi, all same as brigette bardot, all same as gary cooper, all same as pretty woman, what's her name, you understand? that 'where' whole lot easier than that 'who' ... who? barn owl sitting on dead limb ho ho ho sipping green tea

drinking tea from tin cup, clumsy semper fi etched on one side, dated 1943, dent, blackened bottom, hands warmed, memories fragrant of aunt who sent bits and pieces of father's life as her own life ebbed away, mia saying how odd to think of you with family, presenting stout new cup with subtle red tinge of mashiko clay, same cup now sitting just so on bare pine shelf