CONVERSATIONS with a Hypoxic Dog (CwHD) is a weblog about words and language and other inanities. CwHD began May 1, 2017. The Bookstore opened in July, 2017, providing an overview of my published work. Print and ebook copies are available at my publishing website, majikwoids. A link is provided to these sites below and in the sidebar.

CwHD 92
(A glossary of archaic or uncommon words is added at the end of the essay.)

Slack Water and the Crinoids of Chomolungma

For all of us, mountains turn into images after a short time and the images turn true. Gold-tossed waves change into the purple backs of monsters, and so forth. Always something out of the moving deep, and nearly always oceanic.1

Can buoys, green in color, six to nine feet in diameter, as tall as twenty feet, can weigh several tons. The Owner had decided to follow the green cans across the bar and stood by the forward shrouds directing traffic. The Cabin Boy, Mozzo by name, manned the helm. The two men might have been friends ...

A four or five foot swell, rather benign, provided a bit of spice. The boat, a 41 foot ketch designed by William Garden, wallowed about, struggling up the steep face of wind waves, motoring, slamming into troughs, the tide making. The boat, stuffed to bursting with the Owner's toys, was taking him, his dog, and his family on vacation. Mozzo and the dog had come along for the first part of the journey, delivering the boat to Victoria where the family would join the Owner. The family, apparently, wanted no part of the voyage up the coast.

The helm was sluggish, and Mozzo, in his inexperience, became anxious. Just off Peacock Spit, the Owner suddenly thrust out his right arm, pointing, and yelled, “Turn.” The dog, a Norwegian elkhound, barked.

Mozzo cranked the wheel to the right.

“The other way,” screamed the Owner, arms waving. The dog stood on the gunnel peering over the combing. He looked at Mozzo and barked. Twice.

And so Mozzo cranked the wheel back the other way. The Owner had pointed at the green can buoy coming just a whisker off their bow. Mozzo saw it then, close to, bobbing down the starboard side, a near miss. Not the most auspicious start to the voyage.

Three miles out, ten miles up the coast, still motoring, the ketch decided it had had enough and stopped. The sudden quiet was unnerving. They drifted a bit. Mozzo suggested sails, but with little or no wind the suggestion was ill received. Besides, the sails had not been out of their covers in years. The Owner motored; he chose not to sail.

Mozzo sat at the lifeless helm watching the Washington coast bob up and down. Willapa Bay, he reckoned, off there to starboard. Japan, off there to port. The Owner on his hands and knees down below, cursing, as he tinkered with fuel lines and filters; but the ketch adamantly refused to cooperate. The dog sat on the stern sheets watching gulls lift and turn and mewl. They drifted.

“Shut up,” retorted the Owner.

Time passed. The Long Beach peninsula continued its up and down, the purple hills beyond provided a backdrop at once maudlin and sublime. The mizzen boom rolled to starboard then back to port, giving the winches a good bang each time. Though frustrated with the failure of his motor, untoward anxiety, edginess, also marked the Owner's face. He cursed. A box wrench was flung through the companionway into the gentle heave of sea. The boom swung to port. The boom swung back. Thump.
The dog went below. He hopped onto the settee, sat and considered the Owner.

The dog turned and curled up in the corner. He sighed.

Damn it, yelled the Owner.

Raised eyebrows from Mozzo. Definitely out of sorts, he thought. More than the situation warranted. He wondered, knowing the fellow's history, what goodies might be stashed aboard. Did he fear having the federales on board?

Reluctantly, the Owner called the Coast Guard for assistance. They waited in silence. The dog slept. The Coast Guard arrived, a stout line looped the ketch's samson post and off they went. They crossed back over the bar which was, of course, a milk pond. Mozzo thought he might easily canoe this glassy expanse. Well timed, this rescue. Slack water.

Between ebb and flow is slack. Not always a milk pond, but usually quite benign. For the businessman, slack is a slow period. For a climber, a loose bit of rope. Also, the dictionary tells us, the word suggests negligence. The link below is to a video that is not about ocean, but about ocean's obverse which is mountain. The Euclidean perspective (a hairball best left to mathematicians, but useful in this context) suggests that all space is unique yet comparable. Its otherness lies in its nature.2 Many mountains were once sea floor; much of the seafloor was once mountains.

Slack features prominently in the short film. The contention made in "Trail Dog" that happiness is beyond good and guilt is almost so. Almost. But beyond happiness and its opposite,which is sorrow, beyond all dualities, is what I chose to label Slack Water. Slack Water is a place as well as a state of mind. It is where animals---dogs and cats, deer and whales---live. That is, if the animal in question has not been too domesticated. Slack Water is what humans---especially those who are out of sorts---seek. Slack water, to all who know the tides, gives a tangible image for an abstract concept.

No words can adequately describe that which is beyond all dualities. The term offered here merely suggests the complete integration that lies beyond concepts. The film linked below is narrated, and the words are well written and compliment the images equally well. But it is the images themselves which tell the story. The Runner and his friends are beyond mischief, happiness, dancing Slack Water.

A story is one medium for explicating the difficulties of concepts. A film is able to provide visual information to fill in the blanks. Ultimately, humans, with their limited ability to see beyond the end of their noses, must be moved by some epiphanic occurrence and then expand themselves, physically and mentally, to find Slack Water, and so become their obverse. 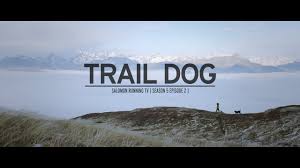 crinoids, marine fossils some of which can be found on the summit of Chomolungma. See website linked here ( https://www.volcanocafe.org/fossils-of-mount-everest/ ) for more information

epiphantic, an intuitive perception or insight, usually unexpected, into the reality or essential meaning of something, usually triggered by some commonplace occurrence or experience.

obverse, the counterpart of a fact or truth.

1Norman Maclean, A River Runs Through It (The University of Chicago Press, Chicago and London, 1976), 144.
2The tallest mountain on the planet is Mauna Kea, Hawaii, at 33,000 feet from its underwater base to its summit.