CONVERSATIONS with a HYPOXIC DOG (CwHD) is a weblog about words and language and other inanities. CwHD began May 1, 2017. Besides thematic essays, the site provides a vehicle for sharing my own words and language. In July, 2017, I opened The Bookstore. This page provides an overview of my published work. Print and ebook copies are available through my publishing website majikwoids. A link is provided below and in the sidebar.

A glossary of archaic or uncommon words is added at the end of this essay.

Leuthold's Couloir does not belong to Joe Leuthold. The couloir is a gully decidedly vertical rather than horizontal which splits the southwest face of Mt Hood. Like other geological features throughout the known universe, the couloir was named for the man (far less often are places and things named for women) who first climbed the route, and does not signify possession. The apostrophe 's' can, at times, indicate ownership; but the construct is far more ambiguous than the personal pronoun. 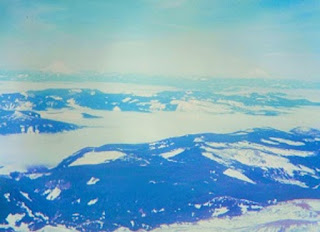 from the base of Leuthold's Couloir, lookinng NNW
photo by gv simoni

'My dog' is more specific, and certainly indicates possession. Dogs are usually rather affectionate creatures and not wont to complain. Some dogs, however, are not the least bit impressed with that 'my', and will blatantly disregard their master's wishes, making their escape, jumping fences, tunneling, chewing through leads, doing whatever is necessary to go gallivanting about the neighborhood. Inorganic creatures, like pickup trucks, are more easily 'owned'; although internal combustion engines are notoriously finicky, and perhaps this is due, in part, to the tyranny of ownership.

Rarely will someone claim ownership of, say, a doorknob. In the grand scheme of things, doorknobs have little importance. The value of an object seems to be proportional to the desire to own that object. Old boats, more often than not made of glass reinforced plastic, are rarely claimed. They languish in backyards and boat yards gathering dirt and mold. A Weldcraft Cuddy King 300 with twin inboard diesels will make hardhearted landlubbers salivate. That's my boat, they'll say. Ain't she a beauty. 20 years of water under the bridge and that same boat will likely be scrap, the victim of electrolysis and neglect.

The folly of personal pronouns? Ownership is a dubious concept. Man's tenure on planet earth is something less than a burp. If you build it, nature will, sooner or later, reclaim it. Mountains, though majestic and seemingly eternal, come and go like governments. So one argument against this penchant for acquisitions surely must be life's brief passing. Does one have time to spend foolishly trying to own things? Like Hitler and other megalomaniacs (saying you have the DTs takes on a whole new meaning these days), is it the 1000 year Reich you are after?

Curiously, folly has a second meaning. The word denotes an edifice that costs far more to build than it is worth, one that has no practical purpose, is merely ornamental, and is commonly found in the hidden reaches of a garden. Many of our 'possessions' are much like follies. They are expensive, impractical, and end up rusting in the yard or gathering dust in the closet.

Possessiveness, the desire to own more than we need, goes hand in glove with domination. Greed seems a likely root cause of this wayward desire. Advertising does nothing but feed these desires. The American educational folly (in both sense of the word) does little to ameliorate the problem. An argument can be made that public education exacerbates the issue. Well educated, intelligent people are often badly and sadly disconnected from reality. They want the American Dream, however transmogrified that fleeting apparition has become. Does happiness come with a six figure income? Not likely.

Emotions are not easily controlled. Reason is often elusive. Homo sapiens are not reasonable creatures. The ability to think clearly must be acquired. Mathematics affords an excellent opportunity to hone this skill. The answers are clear; the process is straightforward though sometimes complex. Aerobic exercise, music and other arts, and various crafts also work well to eliminate the extraneous and focus one's mind on the specific. It is not coincidental that those whose culture focuses their thoughts produce outstanding crafts.

Commonly, knowledge is divided into two general types. Explicit knowledge can be written down, verbalized, and taught. For example, 2 + 2 = 4 is a bit of explicit knowledge. Or: The capital of Oregon is Salem. Or: the jointed rock in the Columbia River Gorge is columnar basalt Tacit knowledge is implicit. Largely subjective. Understanding comes intuitively. What one knows implicitly cannot be verbalized or taught. Most arts and crafts are imbued with tacit knowledge. One can learn the chords on a guitar and even strum a song; but to play well involves mastering sounds emitted from the vibration of strings which require precise plucking with flesh, nails or plectrum, various pressures and positions, equally precise fretting, and a host of other details which one cannot express in verbally. Sheet music is, at best, a skeletal outline of the composers intentions. Interpretation, using all the tacit knowledge at his or her command, is the responsibility of the artist.

Ownership is explicit and binding. One becomes territorial. Defensive. And, in turn, aggressively offensive. "I'll give you my gun when you pry it from my cold, dead hands," is a slogan common among aficionados of firearms. One so often becomes a prisoner of what one possesses.

Wisdom is tacit knowledge. One cannot purchase wisdom on the installment plan. Freedom is tacit. People living through the Great Depression of the 1930s, acquired tacit knowledge. "Necessity is the mother of invention" is a proverb attributed to Plato 2300 years ago; and is often rephrased in English as "having less, means knowing more." Conversely, having more, it seems, often means knowing less.

We have too much. Some have far too much. The wealthiest 1% of the world's population owns more than half of the world's wealth.1 10000 years of human greed has done the planet irreparable harm. And the material objects from cars to shoes seem to be poorly made: all sizzle and no steak. Often disposable. Gimcrack gimmicks.

Cultures that eschew materialism have a curious knack for producing exquisite crafts. The Navajo is one such. Their tradition maintains that one only needs enough to take care of one's family. Hozho is the Navajo belief system that delineates how one must stay in harmony and beauty with the world. A simple tenet is to own less. Though Hozho is a culturally specific aesthetic idea of the Navajo; many of its tenets are held by indigenous people everywhere. Doing more with less, for example. Respect for the natural world. A greater kinship with all living creatures. The Navajo, of course, are renown for their crafts, especially blankets, jewelry, and sand paintings

The Amish rely on a pragmatic code (though the source for their belief that separation from the modern world is essential to their salvation does come from a literal interpretation of their Bible) that severely restricts their behavior. The primary motive belief is akin to the vow of poverty taken in many monasteries east and west. They are farmers. They avoid contact with the outside world. The horse still provides their transportation. Theirs is a communal existence. Ownership, such as it is, is shared. And, of course, their skill at woodworking and cookery is widely admired and copied.

A simple means to achieve less is to recycle all the detritus in one's life. Redistribute assets. Give it all away. Both minimalism and living off the grid have their roots in a desire for shared communalism and respect for the natural world. Minimalist are known to be quite self-sufficient. Craftsmanship is part of the creed.

An addendum to all of the above is that once past possessiveness, personal pronouns can be useful. They often register a commitment. 'My dog' necessarily implies ownership; but the phrase can also suggest a determination to provide and care for the dog, a kinship quite apart from ownership.

couloir, a French word, with the meaning of a passage or corridor, commonly used by climbers generally.

gimcrack, flimsy or poorly made but deceptively attractive.

transmogrify, to change or alter greatly often with grotesque or humorous effect.

wont, in the habit of doing something, accustomed