THE DOGS AT THE GATE 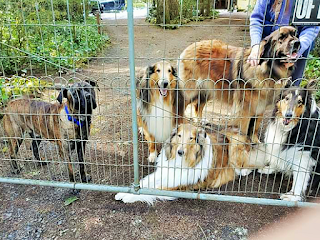 For most of us, life is a continuum. We divide this continuum arbitrarily with age and occupation and other divisions; and these divisions, these nooks and crannies in which we fit our selves, may be considered and selected either objectively or subjectively or, more often, randomly. Infant, toddler, youth, teen, adult. Student, worker, retiree. Bold. Meek. We are shaped by our environment: physical, mental, and spiritual. If we were born and raised in Calcutta, we would likely be beggars. If we were born on the Diomede Islands, we would feast on whale blubber. The nature-nurture discussion continues thousands of years after its inception with no clear resolution in sight. No matter. None needed.

For most of us who are immersed in the immense cultural flow known as western civilization, possessions come to take precedent. We are what we own. In many instances, our possessions come to possess us. Fences, locks and electronic surveillance are sure to follow. This insistence on owning land, houses, cars, gadgets, dogs, cats and what-not, includes, unfortunately, owning people. An economic argument suggests all this possessiveness, including slavery, is necessary. This premise, like all based on economics, is both tedious and specious.

Distinctions between owner and owned can be cut rather fine. A hair's breadth. The lead photograph, 'The Dogs At The Gate', is not about possession; but rather about protection. These dogs are not 'owned'. Their 'owners' abandoned them. For two of them, neglect and abuse was their lot. Old dogs often suffer the same fate as old people, they are discarded. This is an interesting corollary to possession: If it breaks, don't fix it. Throw it away. Get a new one. A better one. A bigger one. Such is western civilization.

Perhaps you disagree. Perhaps you think that much too broad a generality. Consider: Two pillars of this civilized culture are religion and politics. The Ancients created gods to explain what they could not understand. Arguably, the Greeks of Socrates and Plato established democracy. Science and the recalcitrant leaders of organized religion, have put paid to many belief systems. Americans have ended democracy. Western religions cultivate ownership. We are all god's children, they tell us, and batter us with the alms basket. They take the vow of poverty, but it is the people, historically, who have suffered the grind of poverty. And both archbishops and industrialists, popes and kings, know that needy people are more manageable.

Just for good measure, it might be noted that Eastern religions, in general, have no such inherent need for possessing souls, for erecting monuments to the glory of ephemeral beings, their innumerable gods and goddesses. But Buddhists and Hindus and what-have-yous become possessed by possessions as easily as those of us in the West. And the politics and and religions of the East are inextricably intertwined. For every Gandhi or Nehru there are a multitude of Maos and Lon Nols and moguls and maharajahs, Taj Mahals and Summer Palaces.

The ruling cliques, both lay and cleric, drive the legislation that erects ephemeral boundaries and quotas, restrictions and tariffs that guard the 'national interest' and which profits only the members of the cliques and those who empower them. The military gets fat on weapons. Industry gets fat on the military. Insurance companies get fat on premiums to protect are possessions. Pharmaceuticals get fat on drugs to enhance and preserve our bodies and what remains of our minds.

No matter. These are not revelations. The preceding little diatribe is just a snippet of a discussion that fills book after book, if one cares to pursue the argument. Or read history. The gist of course is that power emanates from possession. And wealth is the outward guise of power. Economic arguments abound, rationalizing all this business. As a species, we are rather adept at rationalizing.

Roger Payne has spent a lifetime studying and defending whales. In his 1998 book, Among Whales, he wrote:

Using an economic argument as if it were the soundest basis for judgment is, of course, at the root of the tragedy of our times. One could hardly find a clearer example of what such reasoning leads to than the present state of whales. Simply stated, putting economics first is the myopia of this the most shortsighted of all civilizations; it is the view for which our era will be remembered the longest, the addiction for which we will someday be judged more harshly than the most prejudiced medieval society. The ultimate expression of our madness is that we revere as wise those who put economic considerations above all else and sneer at those who see the madness of such a system of values, labeling them as unrealistic. Meanwhile, we spend all of our children's inheritance to maintain ourselves in the myth that what we are doing is viable. I would offer that this is the most deeply flawed, most expensive belief ever adopted in the history of our species.

We are driven by our desires, and all too often neglect that which we need most. Payne suggests that it is our 'wild' selves we need most, and one cannot but agree. That word 'wild', however, has too many connotations and fails to convey precisely the point he tries to make. Humans are animals; that is the reality. We are born from the wilderness as all animate creatures are. Only humans deny their origins; only humans feel a need to civilize the wild. Yet, the attraction remains. Payne wrote:

Remote and imperturbable, the lives of whales are somehow enough to match any fantasy humanity can create. They are what we have lost, what we yearn for. They are in some ways the last wild voice calling to the consciousness of terminally civilized humanity, our last contact before we submerge forever in our own manufacture and irretrievably lose the last fragment of our wild selves.
---Roger Payne, Among Whales

But perhaps Mr Payne has understated the case. As wildness is lost on the planet we lose not just a last fragment, we become in fact fragmented, not whole, become some unwholesome creation who knows nothing but power and greed and corruption. Certainly, we are not who we think we are; we are not unique; we are not singular. We are not superior to the rest of creation. At various times our costumes change. We adorn ourselves with different masks; but there is little real change. And whether Catholic or Muslim or Protestant or Hindu, Irish, Burmese, Chukchi, or Australian, we all suffer the same faults and fates.

But since we are not puppets dancing on strings, we can gather up the shards of our fragmented existence and become, simply, one again (or mostly so: see footnote on Charles Scammon). And just how might that be done? From Aldo Leopold:

Samuel Whittemore Boggs, the geographer, once spoke of "the wholesomeness of wholeness." The wisest man is insufficiently conscious of the remedial quality of mere presence in the wilderness when he first comes from the marketplace of nerve-wracking half-truths and no-truths into a genial haven of a whole ... and he feels himself becoming whole again.

Wholesome and wholeness are often listed as synonyms. They might be, at times. They are not always. Wholesome refers to that which promotes spiritual or mental health or well being, an adjective. Wholeness is a noun, and generally means 'not broken.' When one is mentally fragmented, broken, it is necessary to find something wholesome to help repair the damage.

And so we return to the dogs at the gate. The companionship of dogs is usually wholesome. Swimming with dolphins is often used as part of a healing process for battered women. And whales, at least the grays of San Ignacio Lagoon, have a miraculous (I have selected this word carefully) power to transform the most nerve-wracked, embittered human into one who is at peace with the world.

The dog in the photograph is Cowboy. So badly abused and neglected he could not be groomed, but only shaved. The end of his tail was amputated due to a gangrenous injury that had never been treated. When Cowboy first arrived at our house, he made for the back bedroom and lay down beside my wife's mother's bed. Laura patted the dog and smiled. Largely bedridden, there were few pleasure's remaining in Laura's life. Responding to the petting, Cowboy sat up and lay his head on the side of the bed. Then, slowly, the old collie hoisted himself up beside the old woman and lay down. And so they remained, a comfort to each other, healing one and another, fast friends for the time left to them.

Has the case been overstated? Is this merely some modern day bit of psycho-babble? Are humans guilty of reeking havoc on the planet and its creations? From The Eye Of The Whale, a quote from Herman Melville's Moby-Dick offers some insight:

eye of gray whale, drawing by Charles Melville Scammon,
The Marine Mammals of the North-western Coast of North America, 1874

What is it, that nameless, inscrutable, unearthly thing is it; what cozening, hidden lord and master, and cruel, remorseless emperor commands me; that against all natural lovings and longings, I so keep pushing, and crowding, and jamming myself on all the time, recklessly making me ready to do what in my own proper, natural heart, I durst not so much as dare. Is Ahab, Ahab?

I am a heretic, using the internet to debase the internet. From whatever perspective, the Internet is a cultural wasteland. The immense quantity of data collected is beyond manageable. This data poses no threat to the individual until someone decides to seek you out. WWW is the new plague, and should be avoided. Support human businesses, local venders. Visits to the web should be as infrequent as television viewing. Stay off the phone. Look people in the eye. Those who communicate by text message or similar inanities have the least to say.

Eye Of The Whale (2002), Dick Russell. p633. The book focuses on the migration of gray wells from Baja California to the Bering Sea. Charles Melville Scammon, who drew the eye of the whale, was a whaler who discovered the breeding lagoons of the gray whale and was responsible for their wholesale slaughter. He was also an excellent amateur naturalist, and his book on marine mammals is still relevant. Scammon apparently had a change of heart, and quit whaling to join the Revenue Service, a forerunner of the Coast Guard, whose main function, ironically, was to apprehend poachers.

Moby-Dick, 1851, Herman Melville, is a classic everyone should read. The quote is from the chapter 132 entitled 'The Symphony'.