Over the last two years, Google data recorded 7536 views of CwHD. Most of those views lasted less than a minute which makes for a poor bounce rate. A bounce rate is the percentage of visits in which a person leaves a website from the landing page without browsing any further. No matter. Words and language are, like the complicated business of driving a vehicle, taken for granted by most people. Boring, in fact. Unless reckless. Or intoxicated. Or both.

I find this odd.

Odd, too, is the way many people go through life. Just browsing is what many seem to be doing, living without intention or direction. Or living impetuously. No doubt Google could put numbers on this generalization. For example, currently the population of the planet is 7.7 billion. The World Population Clock web page keeps ticking over with births and deaths. To the minute, 50,287 people have died today. 121, 276 have been born. 30% of the people on the planet are just trying to survive. They are not bored. Or impulsive. Dire straits focuses one's attention rather acutely.

In Walden, Henry David Thoreau wrote that "...the mass of men lead lives of quiet desperation..." And that desperation might well be humdrum or horrific. For example, according to the Center For Disease Control website, over a billion people worldwide are without clean water or proper sanitation which leads directly or otherwise to the deaths of a million children each year. Bored with your job, are you? Having a midlife crisis? Credit cards maxed out, are they. Alas.

Webb Chiles is an intrepid fellow who has circumnavigated the globe six times. He has made these voyages, for the most part, alone. The greater part of one voyage was done in a small, open boat. Mr Chiles has insisted on living an epic life, as he puts it, traveling to the extremities of experience and then reporting back. He is rarely ever feckless or foolhardy. He is, in a word, a seaman. He is, as well, a wordsmith, a fellow who takes language seriously. He has written several books and maintains his own web log. Generally, he has little tolerance for the dreary, humdrum, often intolerable life ashore. He prefers the open sea and solitude.

Mr Chiles no doubt concurs with Thoreau, and so chooses to live his life with a fierce intention to be heroic. Though I, too, vote with Thoreau and Chiles, my point of view is slightly different. The distinction between us is but a hair's breadth, yet it is significant.

When Henry David went to Walden Pond, the small lake and its surrounding forest were wilderness. Now it is just a short drive from Boston; but in 1845 it was something of an epic trek. During the two years, two months, that he lived there, Thoreau began to write Walden, a classic of American literature. He wrote:

I went to the woods because I wished to live deliberately, to front only the essential facts of life, and see if I could not learn what it had to teach, and not, when I came to die, discover that I had not lived. I did not wish to live what was not life, living is so dear; nor did I wish to practice resignation, unless it was quite necessary. I wanted to live deep and suck out all the marrow of life, to live so sturdily and Spartan-like as to put to rout all that was not life, to cut a broad swath and shave close, to drive life into a corner, and reduce it to its lowest terms, and, if it proved to be mean, why then to get the whole and genuine meanness of it, and publish its meanness to the world; or if it were sublime, to know it by experience, and be able to give a true account of it in my next excursion.

Living deep requires intention and focus. Consciousness is not spontaneous, not instinctive, not autonomic. We must put some effort into our consciousness for it to function as we think consciousness does. Philosopher Dan Dennett in his TED Talk (2009), 'The Illusion of Consciousness', likens it to a conjuring trick. He points out that at any given moment our attention is focused entirely on a point the size of our thumb nail at arm's length. The background and foreground are filled in by our brains. Think pixels. Or dots of paint from an impressionist's brush. Our brain (or some combination of the 37 trillion cells comprising the human body) creates the bulk of the image. We really do not see what we are seeing. Or smelling. Or hearing.

To be conscious, then, is not something to take for granted. Webb Chiles' desire to suck the marrow out of life led him to the sea. The impression given by the words he writes is that nothing less would do. So too with Thoreau. To put all that is not life to rout, it seems, requires a challenging environment. The high mountains might qualify, or the deserts of the world. Wildness. Little else. Certainly not Levittown.

My take is that Levittown would do just fine. Seclusion is a state of mind. If each moment of anyone's life is considered to be an epic occurrence, just where you are becomes irrelevant. And, as I have written before, we create those moments ourselves, that bit of reality. How is this done? I am fond of this quote from the philosopher Ludwig Wittgenstein: The world we see is the words we use. The world we create comes from the various and multitudinous synapses in the recesses of our brains, and the subsequent verbiage we use to describe what we create. Presto change-o: Reality. And Consciousness. Or Consciousness, then Reality. No matter.

As far as publishing one's experience to the world goes, that reporting back business, one can undertake the task or not. Certainly it seems to be true that the writer's job (or painter or musician or name your art) is to create work that reports back from wherever their fancy finds them. Warhol painted soup cans. Beethoven wrote symphonies. Wildness need not be part of the program.

Singer songwriter John Prine, an old geezer like Mr Chiles and myself, wrote a lyric that went: ... strangers had forced him to live in his head ...(from the song 'Donald and Lydia', album John Prine, 1971). We all live in our heads. Each of us does so uniquely. What one usually finds is that strangers have forced us out of our heads; and we become lost in a gray and threatening world, a place of confusion and dread.

Open ocean is a fine arena to regain one's perspective. Mountains and deserts, too. But a walk in the park might be all one needs. Or simply a quiet corner of the house. Solitude and simplicity are often necessary for introspection, but not requisite. Trees and trilliums would do. Cats and dogs. The one proviso I would add is this: Always remember what the Dormouse said. (Read the book, listen to the song: you decide.) 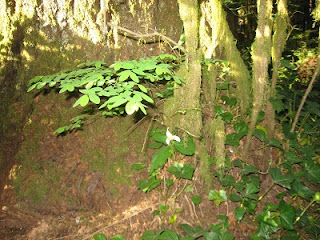 Find quote from Walden in essay by Elizabeth Witherall (and Elizabeth Dubrulle) in their essay on Walden (web page: The Writings of Henry D. Thoreau). Depending on your edition of the book, the quote is on p90.