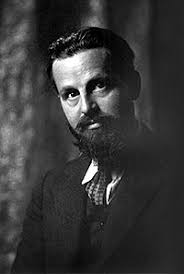 Rex Todhunter Stout, born in 1886 and a published writer by 1920, was best known for creating what are generally considered the most refined and sophisticated detective fiction of his time. Nero Wolfe, his reclusive sleuth, worked as hard on cultivating orchids and his palate as he did at solving murders. His foil, Archie Goodwin, served as Wolfe's factotum and more. No longer the somewhat obtuse friend as Conan Doyle and Christie had portrayed Watson and Hastings, Goodwin became an equal with the fat man.

And it is with Archie Goodwin that some first steps are taken towards the creation of the hard boiled detective to come. When Wolfe needs to circumvent the law, it is Goodwin who beaks and enters. It is Goodwin who carries the gun. It is Goodwin who throws the punch. He may be suave and witty, but the veneer is thin and beneath lurks the tough guy who doesn't hesitate to do what needs to be done.

Like Doyle and Collins, Stout worked a variety of jobs in order to support himself while he wrote. He stopped writing for several years as he found earning a living and writing too daunting. His decision was to work and save until he could support himself as a writer. Fortunately, he sold a banking system designed primarily for schools to various institutions, and the income from the sale freed him to resume his writing.

Stouts first four novels, not mysteries, found publishers and moderate sales. He had written several short detective stories, and in the early 1930s made the decision to concentrate on that genre. Fer-de-Lance, published in 1934, brought Nero Wolfe to the reading public. Stout, though not exactly a model for Wolfe---always rather thin and outgoing himself --- did imbue the detective with his passion for fine food and gardening. The top floor of Wolfe's fictional brownstone in New York City had been converted to a potting room, work room, and green house. Besides Goodman, the household consisted of Theodore, who looked after the 10,000 orchids, and Fritz Brenner, the master chef, who catered to Wolfe's appetite. 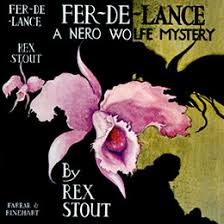 Fer-de-Lance sold well and Stout began churning out a new Wolfe story every year. He also found time for political activism, supporting various democratic organizations. He was a past president of the Mystery Writers of America and won numerous awards including a nomination by an international panel as the foremost writer of the genre.

He died at his home in Danbury, Connecticut.