NOVELS AND OTHER NONSENSE


The novel is a literary genre whose history is 1000 years old; and this history is not without its controversy. Lady Murasaki, a well placed court figure in a Japanese emperor's retinue, is said to have written the first 'novel'. The Tale of Genji, is a long narrative with some development of character, plot, and place. Whether this story is the first novel or not is in dispute. Cervantes' classic, Don Quixote, a work from the 16th century is another early example of the form.

From the Encyclopedia Britannic comes this definition: A novel is an invented prose narrative of considerable length and a certain complexity that deals imaginatively with human experience, usually through a connected sequence of events involving a group of persons in a specific setting.1

The novel is just one of several forms that literature might take: poetry, drama, short prose, and non-fiction are other common genres. In the Greek classic tradition there were but two types: tragedy and comedy. Our penchant for division is inexorable. These days we further split the categories into subcategories and, no doubt, there are categories of the subcategories. Splitting hairs seems to be what our feeble intellects prefer. While this discrimination can be useful in understanding the nature of the beast we are dealing with, such labeling can also be detrimental when it comes to a clear view of the work. Clarity is often obscured by sentiment.

Meet an old man with a young wife and what do you have? Cradle-robber. Gold digger. Someone who picks up a novel by Samuel Beckett inevitably comes to the reading with preconceived notions. Disappointment follows. This will be especially so with his early 'novels.' Tedious, boring, repetitious are three of the kinder epithets often applied to Dream Of Fair to Middling Women (1932), his first novel, as well as to Murphy (1936). The reason for this criticism may be quite simple: Beckett's intention was never to write a conventional novel. He was convinced that Joyce had worked the form for all that it was worth. He wrote:

"I realized that Joyce had gone as far as one could in the direction of knowing more, [being] in control of one’s material. He was always adding to it; you only have to look at his proofs to see that. I realized that my own way was in impoverishment, in lack of knowledge and in taking away, in subtracting rather than in adding."2

His prose smacked more of drama than not. Reading Beckett's 'novels' with this in mind produces a different outcome.

Are they then anti-novels? Literature noir? Prose-drama? None of the above? Ultimately, these are just more labels. The key point here is this: Avoid conceptions, labeling, discrimination. Yes, you must stop on the red and go on the green. But ... And whether the discussion is about Samuel Beckett or The Muppets, best to remember that inevitably an object labeled 'cigar' is always just an object labeled 'cigar.' Anything else is just smoke and mirrors. 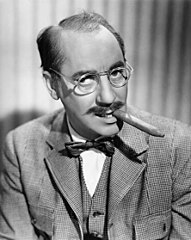 1 https://www.britannica.com/art/novel
2  Samuel Beckett, as related by James Knowlson in his biography.