A BRIEF HISTORY OF THE COLUMBIA RIVER Part 10

Just down stream from the city of St Helens (RM 86), the river narrows from more than a mile to less than a half mile as it runs just west of north. I had forgotten that the ship channel shifts to the Washington side leaving Columbia City astern as it wends its way through the wide flood plain marked by Burke and Martin Islands on the Washington side, and Goat and Deer Islands on the Oregon shore. 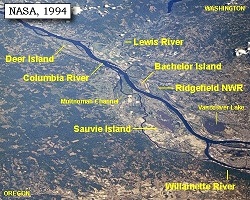 There I sat mid-river in my sea kayak contemplating the six mile breadth of the Columbia and its lowlands, and how geography was so much a function of hydrology. Water was the sculptor of the land. The place had not changed much in hundreds of years. Lewis and Clark saw what I saw. 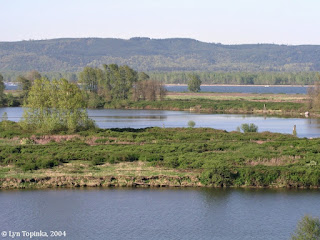 I had the river to myself. No Chinook canoes; no container ships. Thought I would take a lunch break. Looked again. Nothing coming up the river, nothing coming down. I pulled up my spray skirt and fished below decks for my ditty bag.

The thing is, while canoes and kayaks do well to travel at 3 - 5 knots, cargo ships usually do 15 - 20 knots. A rule of thumb: if you can see the white mustache of a ship's bow wave, trouble is only minutes away. The numbers tell the story: At 16 knots, a ship will cover 8 miles in thirty minutes. In fifteen minutes, that same vessel puts 4 miles under its keel. In 7.5 minutes, 2 miles. In something less than 4 minutes, 60,000 tons of relentless steel will cover a mile.

Unwrapping my peanut butter and jelly sandwich, I glanced upriver. A ship plain as day pushing a big bow wave. Salty language ensued. I stuffed my PBJ into my ditty bag and headed for the Washington shore. Not an ideal choice. Heavy riprap bolstered the bank. How close would the ship pass? How big their wake? Just where was the channel anyways? I dug a paddle into the river and spun the bow to face the thudding menace.

Separated from the Lard side by a narrow Chanel, on this Island we Stoped to Dine I walked out found it open & covered with Sm. grass interspersed with Small ponds, in which was great numbr. of foul, the remains of an old village on the lower part of this Island, I saw Several deer ...

I guessed wrong about the channel. This container ship would pass close by, too close. They had not given me the 5 blasts on the horn that indicate a potential for danger. That would be Rule 34d of the Navigation Rules worded as follows:

When vessels in sight of one another are approaching each other and from any cause either vessel fails to understand the intentions or actions of the other, or is in doubt whether sufficient action is being taken by the other to avoid collision, the vessel in doubt shall immediately indicate such doubt by giving at least five short and rapid blasts on the whistle.

I wasn't even a blip on their radar screen. If anyone was looking at their radar screen. As it thudded by, no one came on deck to give me a wave. Saw no one at all. I steadied my little boat with blades flat on the water, watching for logs and other debris that ship backwash often kicks up. I waited for the wake.

Surprised and more than a little relieved, the ship passed by with just a bit of gentle swell and no debris. I took a breath. All things considered, would rather have paddled with Lewis and Clark. Canoes are far more agreeable than cargo ships.

We met 4 Canoes of Indians from below, in which there is 26 Indians, one of those Canoes is large, and ornimented with Images on the bow & Stern. That in the Bow the likeness of a Bear, and in Stern the picture of a man- we landed on the Lard. Side & camped a little below the mouth of a creek on the Stard. Side a little below the mouth of which is an Old Village which is now abandaned-; here the river is about one and a half miles wide. and deep, The high Hills which run in a N W. & S E. derection form both banks of the river the Shore boald and rockey, the hills rise gradually & are Covered with a thick groth of pine &c. The valley which is from above the mouth of Quick Sand River to this place may be computed at 60 miles wide on a Derect line, & extends a great Distanc to the right & left rich thickly Covered with tall timber, with a fiew Small Praries bordering on the river and on the Islands; Some fiew Standing Ponds & Several Small Streams of running water on either Side of the river; This is certainly a fertill and a handsom valley, at this time Crouded with Indians. The day proved Cloudy with rain the greater part of it, we are all wet cold and disagreeable- I saw but little appearance of frost in this valley which we call Wap-pa-too Columbia from the root or plants growing Spontaniously in this valley only ... We
made 32 miles today by estimation - 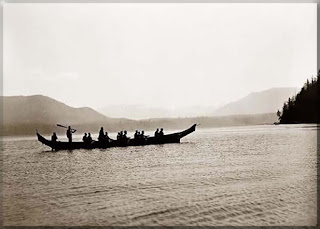