A BRIEF HISTORY OF THE COLUMBIA RIVER Part 6

This is the sixth installment of my brief history of the Columbia River. As I've mentioned, I am only considering the sections of the river that form the Oregon-Washington border. As Lewis and Clark's voyage down the river dovetails neatly with this part of the river, I will include snippets from their journals as well.

The journals are best read in their original format even though the spelling, capitalization, and punctuation are all problematic. Any added annotation is mine. The river, historically, had changed very little for thousands of years before Lewis and Clark recorded what they saw.

I began this exploration of the Columbia River in part through the eyes of Merriweather Lewis and William Clark. Lewis brought with him a Newfoundland dog named Seaman. The dog is mentioned several times in the journals, but from August 1805 through July 1806 he receives not a line. Seaman's Creek in Montana was named by Lewis for the dog apparently on their return journey; but little mention after that. The creek today is called Monture Creek.

As the Columbia winds through what is now the Columbia River Gorge (with Clark and Lewis paddling along, Seaman standing in the bows), a major rapid and several large landslides mark its course before it reaches tide water at what is now called Beacon Rock. The Columbia derives its power as it drops on average two feet for every mile. Through the 100 mile section from above the Dalles to tide water, the drop is nearer five feet per mile. From the reach of tide to the mouth, the Columbia flattens to just a 1/2 foot drop per mile. 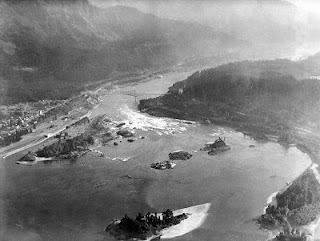 the 'cascades' and lock at Cascade Locks
U.S. Army Corps of Engineers photograph (from Wikimedia Commons)

The aerial view looks westward,downstream, and was taken September 8, 1929. Clearly shown is the main drop of Cascade Rapids where the Columbia River has been diverted southward around the toe of the Bonneville landslide. At the left is Cascade Locks, completed in 1896, which facilitated steamship travel upriver of the rapids. The Bridge of the Gods, completed in 1926, took advantage of the natural constriction of the Columbia between the eroded toe of the Bonneville landslide and the southern valley margin. The bridge still stands at its present location but was raised about forty feet during construction of Bonneville Dam to accommodate ship traffic on the pool that now drowns Cascade Rapids. Lewis and Clark's map has this has this note: ... the Great Shoot or Rapid. 150 Yards wide and 400 Yards long crowded with Stones and Islands ...

The other major geographical feature, alluded to in the photograph description above, is the Bonneville landslide. Clark remarks (October 30, 1805):

a remarkable circumstance in this part of the river is, Stumps of pine trees are in maney places at Some distance in the river, and gives every appearance of the rivers being damned up from below from Some cause which I am not at this time acquainted with ...

These landslides from the steep cliffs to the north dammed the river until it was eventually able to breach the tongue of the slide and carve a new path through the vast slide debris. In legend, native Americans recall this as the Bridge of the Gods. No consensus exists on the dating of the various slides. The probability is that all of the dating is correct in some way. From 1200 to 1700, the cliffs tumbled and diverted the river. 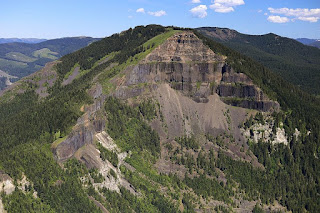 Below 'the Great Shoot', the river began to level and the currents eased. Near what Clark first named 'Beaten Rock', they got there first taste of salt. The huge rock, known in geology as a monolith like Gibraltar, marks the eastern extent of the Pacific Ocean's tidal reach. Despite Clark's entry, the explorer's intent no doubt was to affix 'Beacon' as the name. This was a milestone in their journey. They all felt then that the end was near. 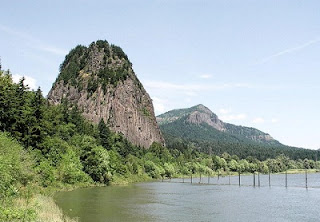