A BRIEF HISTORY OF THE COLUMBIA RIVER Part 5

If this is your first visit to CwHD, a brief introduction is available. Just click on the CwHD Intro link.
To return, simply click the Home link.


This is the fifth installment of my brief history of the Columbia River. As I've mentioned, I am only considering the sections of the river that form the Oregon-Washington border. As Lewis and Clark's voyage down the river dovetails neatly with this part of the river, I will include snippets from their journals as well.

The journals are best read in their original format even though the spelling, capitalization, and punctuation are all problematic. Any added annotation is mine. The river, historically, had changed very little for thousands of years before Lewis and Clark recorded what they saw.

'Native people' is a clumsy phrase. Those who use it mean well, and there is no better term. 'Indian' carries a slightly (and in some cases, not so slight) pejorative tint. And, of course, the word is based on a serious error of navigation on the part of one Cristofor Columbo. Indigenous people, the original inhabitants of a region, have no nifty moniker. They might be known as first people, aboriginal people, or even autochthonous people. Native will do for this account.

From the Dalles to Hood River is about 22 river miles. The terrain and flora begin to change as the river cuts its cleft through the Cascades. The transition is obvious. Lewis and Clark make several observations on the change.

Near the end of October, 1805, they pass a village near the Klickitat River and stop to smoke a pipe.

after brackfast we proceeded on, the mountains are high on each Side, containing Scattering pine white oake & under groth, hill Sides Steep and rockey; at 4 miles lower we observed a Small river falling in with great rapidity on the Stard. Side below which is a village of 11 houses here we landed to Smoke a pipe with the nativs and examine the mouth of the river, which I found to be 60 yards wide rapid and deep ...

As they drifted and paddled downriver, they came upon 13 graves on an island. This is Memaloose, today only 1/3rd remains above the flooding waters of Bonneville Dam. Repeatedly looted and, in native people's view, desecrated by the grave and obelisk of one Victor Trevitt, the native remains were relocated in 1937 (either by the various tribes or the Corps of Engineers), and the count then was given at 650 burials. 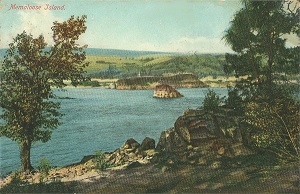 Clark described the above ground graves as 'squar vaults.' These burials, odd to Clark, were common among native people world wide. In Tibet, for example, a similar practice is called 'sky burials.' The body is placed in the open, usually a high rocky place, and allowed to decompose and be scattered by winds and birds and other carrion eaters.

passed three large rocks in The river the middle rock is large long and has Several Squar vaults on it. we call this rockey Island the Sepulchar. The last river we passed we Shall Call the Cataract River from the number of falls which the Indians say is on it- passed 2 Lodges of Indians a Short distance below the Sepulchar Island on the Stard. Side river wide, at 4 mile passed 2 houses on the Stard. Side, Six miles lower passed 4 houses above the mouth of a Small river 40 yards wide on the Lard. Side

Clark's 'Sepulcher Island' is, of course, Memaloose. The name Memaloose seems to be derived from the Chinook word memalust, which means "to die".