This edition of CwHD continues my series of observations on writers and how character, or the lack of same, stamps its mark on their literary style. As I observed earlier, how one lives colors every aspect of what one does. The old computer science dictum still applies: garbage in equals garbage out.

This pre-Socratic momento mori was inscribed in the forecourt of the Temple of Apollo at Delphi. Socrates later expanded the idea and his thought became: The unexamined life is not worth living ( Greek: γνῶθι σεαυτόν).

Hemingway's protagonist in For Whom The Bell Tolls, Robert Jordan, struggles with a more salient momento mori as he sits on a Spanish hillside, mortally wounded, waiting for the soldiers to come. He thinks suicide may be an option; but decides against this option for there was "... still something you can do yet." Written in 1939, Hemingway himself still had something he could do. By the late 50s, his options were gone; and the shotgun beckoned.

As I mentioned last week, the man's life style went counter to his writing style. How he wrote---simply, incisively, with an understated elegance---was not how he lived. His life seemed to be one futile attempt to be the characters he created in his fiction. He knew his creations; but he did not understand himself.

This conflict between creation and character and the abusive lifestyle that followed led to a breakdown of his abilities and ultimately his death. His life became complicated, his thinking muddied, and his actions predictably angry and destructive. 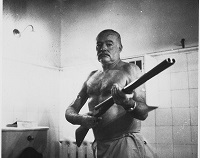 Benjamin Franklin in his Poor Richard's Almanack wrote: There are three Things extremely hard, Steel, a Diamond, and to know one's self. Need something to do? Have a good long look in the mirror.

Please leave a comment or question in the Comments box below (or click on No Comments). You may add your email address or publish anonymously. Preview your comments, then Publish. The Z-dog thanks you.