A BRIEF HISTORY OF THE COLUMBIA RIVER Part 2

Last week saw the beginning of a brief account of the history of the Columbia River. This week the story brings us to 1804 and the arrival of Merriweather Lewis (with his dog, Seaman) and William Clark at the river. 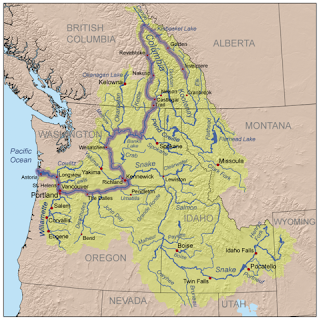 Early travelers may have populated the river 20,000 years ago. The Clovis culture, dated about 13,500 years ago, is more certain. The native Americans the Corps of Discovery found along the Columbia were linked to these early groups. By the 1700s, this heavily populated area was already in decline. Smallpox, brought by traders to the mouth of the river, had spread quickly and taken a heavy toll on the tribes.

The expedition to the Pacific Northwest led by Lewis and Clark, came down the Snake River and entered the Columbia at the confluence just opposite of where Pasco, Washington now sprawls. They camped on a point of land that has become Sacajawea State Park. 32 miles downstream from this spot is the imposing edifice of McNary Dam.

To the north, the river extended into Canada several hundred miles, then made a 180° turn to the south running 200 odd miles to its origin in a lake nestled between the Rocky Mountains and the Selkirks. The river drains 260,000 square miles, is about 1250 miles long, and its average measured flow is over 240,000 cubic feet per second. 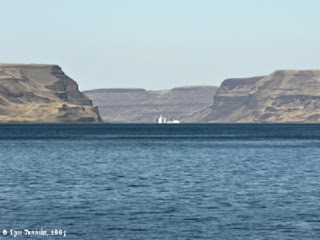 16 miles south of Pasco is Wallula Gap. Created by the many Bretz floods (1000 feet high walls of water moving at 65 miles an hour), the Gap will be the eastern terminal of our narrative as we voyage downstream with the Corps.

From the journal of William Clark [these journals are best read in their original format even though the spelling, capitalization, and punctuation are all problematic. The annotation is added.] :

"... the river passes into the range of high Country at which place the rocks project into the river from the high clifts which is on the Lard. [larboard or left] Side about 2/3 of the way across and those of the Stard. [starboard or right] Side about the Same distance, the Countrey rises here about 200 feet above The water and is bordered with black rugid rocks ..."
William Clark, October 18, 1805

According to Robert Hitchman1 Wallula is a Nez Perce name and apparently just a different rendering of Walla Walla, meaning "place of many waters." The river behind McNary Dam is over 300 feet deep, and a good deal of imagination is needed to recreate the early river.

In ascending the river fifteen miles from this place, the land on either side rises to some fifteen hundred feet above the level of the river which occupies the entire bottom from rocks to rocks on either side; when the land suddenly drops from this high plain which extends from the Blue Mountains on the east to the Cascade range on the west, forming, as it were, a great inland dam across the Columbia River, fifteen hundred feet high at the place where the river has broken through the dam. As you pass out of this gap, in looking to the north and east, the eye rests upon another vast, high, rolling plain, in the southeastern part of which lies the beautiful valley of the Wallawalla ...2

Next week: the Musselshell Rapids

Please leave a question or comment. Click on the Comments prompt below. Use an email or Comment as Anonymous, Preview if you wish, then Publish. Thank you.