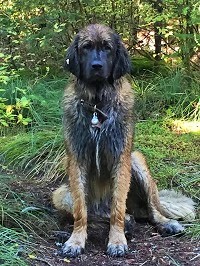 The Z Dawg is on vacation, off to Curaҫao. Stella the Waterdog returns. She has some thoughts on shallow water.

James Fenimore Cooper, 19th century writer (The Last Of The Mohicans), had this to say about that simple little word creek:

'Creek,' a word that signifies an inlet of the sea, or of a lake, is misapplied to running streams, and frequently to the outlet of lakes.

The 1934 Webster (last of the handbound dictionaries and a proper size for a dog my size) has 'creek' as a narrow inlet in the shore of a bay or cove winding through a low coast.

A fellow named Worcester, a competitor of Webster and the flag bearer for the English those erudite fellows at Harvard spoke, had a 'creek' simply as a small inlet. He was the first to note that "... in the Middle, Southern, and Western States, the word might well mean a 'small river" or a "rivulet."

Here in the Pacific Northwest no one would call the Columbia River a creek. In my backyard, a small stream of running water is named Boulder Creek. It runs into the Salmon River to the Sandy to the Columbia. This a common usage in this part of the world.

Now some folk use 'crick' instead of 'creek.' This is especially so in the Midwest and south. Them boys at Harvard would scoff at such usage. But it was good enough for Mark Twain (The Adventures of Huckleberry Finn), and William Faulkner (Flags In The Dust.) Good enough for me. 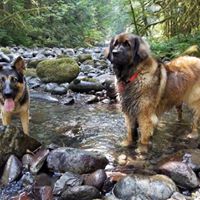 Stella in the crick with her buddy Edgar
at September 14, 2017