Coyotes and wolves, ravens and crows share a long history of work and play. They are ubiquitous critters found in every clime and any terrain. They populate the myths of all Native people. The name coyote comes from its Aztec name huehuecoyotl which the Spanish corrupted to coyote. Raven comes from old English hræfn and similar words in Icelandic, Dutch, and proto-German.

The Chinook called coyote talapus, the trickster. One of the many tales of talapus relates how he created Hyas Tyee Tumwater, Willamette Falls.


Talapus came from across the mountains to the river valley. He found that skookums were read morerampaging about scaring the People. Frightened as they were and hungry, too, they asked Coyote to help them.

And so he did. First he baited the skookums with roots and berries laced with salamander juice. They ate their fill. As sick as they became, it was easy for Coyote to convince them that the country thereabouts was plagued with nothing but misery for skookums. That's how he rid the place of the beasts. They moved on into the mountains.

But the People were still hungry.

"Let's make a waterfall across the river," Raven said to Coyote. "Then the People can catch fish." So they made a rope by twisting together strands of dogbane root. Holding one end Raven flew to the west side of the river. Coyote stayed on the other side. Carrying the rope between them they went down the river looking for a good place to make the falls. They stopped just below where Salem is today and Raven said, "Let's make it here."

But the bird spoke in the Clackamas language and Coyote only knew the Chinook language. He misunderstood what she said. Instead of making a waterfall, he turned three beavers, two frogs, and a rubber boa into rock.

Raven squawked and shook her head. Coyote shrugged and grinned. They walked on down the river to where Oregon City is today. "Let's make the waterfall here," said Raven. This time she used sign language, and Coyote understood.

So they stretched the rope tight. Coyote pulled hard. Raven gathered some friends and they all pulled and pulled. Then Coyote called up another spell and turned the rope to rock. The river roared and rumbled, but had no choice. Over the rock the water cascaded creating a deep pool where the salmon gathered before making their leaps. Coyote and raven showed the People how to make nets woven onto long poles. And so a way of life was born. 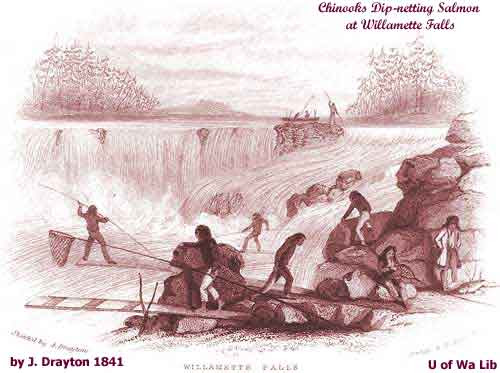