If this is your first visit to CwHD, a brief introduction is available. Just click on the CwHD Intro link. To return, simply click the Home link.

The four basic principles of Japanese aesthetics are: simplicity, subtlety, stillness, and restraint. Of the four, only stillness seems ambiguous. How might the absence of movement or sound apply to a written work?

Contention is the key; or rather, the absence of contention. Consider a conversation with a friend. If the dialogue becomes heated---push comes to shove---what ensues is usually a case of my stick is bigger than your stick. One pushes; the other shoves back. Repeat until blows are struck.

Writers often employ dialogue or description that is contentious. Usually, this is done to build tension in a narrative which can then be resolved---movement to stillness. Create a problem. Provide a solution.

The Japanese poem known as a waka does just that. The waka has a prescribed format: it is constructed in two sections, the first with 17 syllables, the second with 14. The first section presents a problem; the second resolves it. Haiku became the rendering of the first section on its own. Even within this short poem, a tension is created in the first lines, and then resolved.

Before embarking on the essay, consider something as commonplace as running. Deceptively simple, and fast running is especially so. There must not be any elaborate movements of the arms or legs. The upper body must be still. If the foot contends with the ground---listen as it slaps with each stride---the runner is literally braking with each footfall. Restraint is needed to keep stride length appropriate to speed---understriding is slow; overstriding is injurious. When done right: flying. 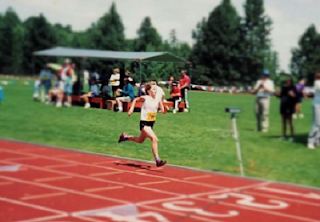 walk before you fly

The five paragraph essay, often referred to as 'classic' because its origins are found in the rhetoric of Roman orators, works in similar fashion. Dialectic, with its formula of 'thesis + antithesis = synthesis' provides a formula for this type of essay. State a subject simply, subtlely provide an argument or evidence, use restraint to restate the subject, and end with a cogent conclusion.

Some argue that the form is too restrictive and has little value. Others would have it that this essay form developes analytical skills. The ink drawing that the Japanese call sumi-e seems to argue with the former as do most of their traditional arts. Indeed, most skills, it seems to me, require a period of repetitive practice. Whether hammering a nail or running a trail, baking a cake or casting a fly, acquiring the skill begins with small steps done slowly.

The lesson, of course, is to walk before you run. Simple.